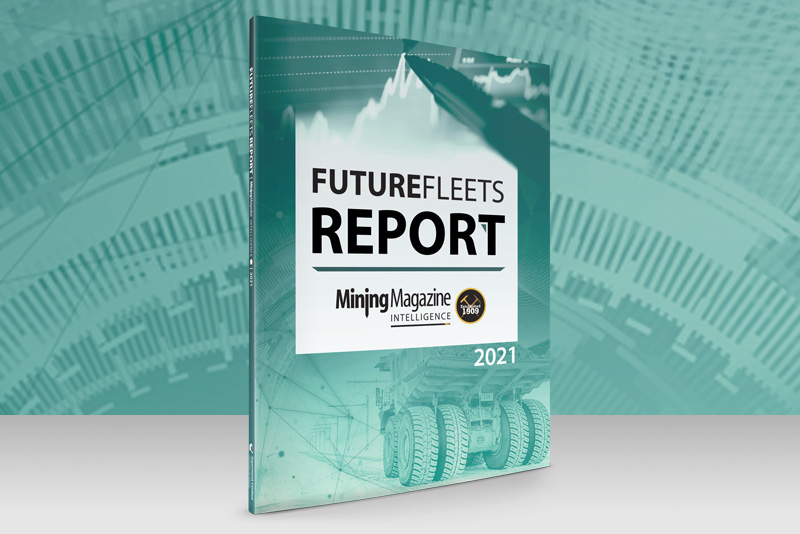 The function of the Mining Magazine Intelligence Future Fleets Report was to identify the operations and developments around the world either using or planning to use the most innovative fleets, and then to review for global, regional and equipment-specific trends.

Unlike the Automation and Digitalisation databases previously built by MMI that each profiled around 70 operations of note, the Future Fleets database represents a more exclusive class, with just 44 mines and developments involved in truly innovative fleet technologies.

One of the barriers to a greater take-up in future-looking fleet technologies was a higher capital cost for such fleets – depending on how battery costs are treated, the premium is somewhere between 25-75% for electric fleet units. However, from the case studies we’ve reviewed, future fleets generally make a fairly straightforward and convincing business case for investment – and the longer the mine life, the greater the return.

In terms of motivations for investment, reducing greenhouse gas emissions was comfortably the most commonly cited. This was in line with mining’s rapidly advancing campaign against climate change. The Future Fleets database has, therefore, found itself naturally focused – mostly, though not exclusively – on electric vehicles. The electric revolution wasn’t restricted to the core mining fleet, with support and utility vehicles also evolving – auxiliary vehicles were regularly working off battery-electric power and some mines had commissioned electric buses to transport workers to site.

Fewer particulates and lower noise levels in operating environments were cited as important to improving the working lives of current employees and attracting new talent.

Improved efficiencies and operating costs were other common threads. This was consistent with the regularly-stated need for mining executives to back up their investment decisions with a strong business case – the implementation of “technology for technology’s sake” was sacrilege for an industry once heavily criticised for its lack of capital discipline. Some miners were reporting a drop in diesel consumption of up 40% on the back of partial electric fleet introductions.

Though not as dramatic as the impact from major reductions in operating costs over the life of mine, there were some big savings to enjoy on the capital bill, too. This was chiefly through the reduced need to build expensive ventilation systems if an underground fleet could be sufficiently electrified to pull emissions down below critical levels.

Bureaucracies in some parts of the world, most notably Canada, were also known to contribute to the capital bill if an operation helped meet government-stated emission targets.

Meanwhile, openpit mines – particularly large operations with long, straight tracks – are able to take advantage of hybrid-electric technologies and trolley-assist infrastructure to bring down their emissions and reduce their fuel consumption without having to compromise on haulage capacities. Trolley-assist systems also allow haul trucks to increase their travel speeds by almost 100% and so there are productivity gains to be made.

When it came to shovels and drills, a lot of the technology was less about electric power. Still, the focus remained on energy savings, often through dieselhydraulic systems or artificial intelligence applied to drill systems for efficiency. ‘Other’ future fleet innovations of note included advanced marine mining vessels.

Ultraclass trucks were a comparatively bland form of Future Fleet in that they were about size rather than innovation, necessarily, but these advances remained important. The largest payload trucks at openpit mines had capacities around 400 tonnes and were devoted to bulk tonnage iron ore and coal operations in Australia and North America, mainly. There were fewer ultraclass trucks in use at copper or gold mines, though they did have a presence.

Geographically, North America contributed the most future fleets and that contribution was in turn dominated by Canada (Ontario alone contributed some 16% of fleets to the database). There was a relatively outsized presence from Europe given the number of operations. Australia failed to  maintain its level of presence from the previous two databases built, and was on a rough par with Europe and behind South America.

This regional showing is likely linked to the emissions standards and probably explains the discrepancy in North America and Canada – though it was only in March last year that the Whitehouse rolled back emissions regulation, the writing had been on the wall since the reluctantly departing Donald Trump took office in 2017 and announced his intention to withdraw the US from the Paris Agreement less than six months later.

As one would expect for any database focused on the futuristic, the implementation of these technologies was recent; generally, in the past two years. However, we should recognise there were operations in the database that had been working on electrification programmes for more than a decade. Again, this was led by mines in Canada.

Looking to next year, it’s worth noting how hydrogen developments were gathering momentum as we went to press. That technology promises to be the next major change in the energy mix for mining fleets, though, for the moment, only Anglo American is actively initiating mining activities using a hydrogen-fuelled truck.

More generally, it’s fair to say miners were increasingly opening their thinking to a range of carbon-low/free technologies. Nouveau Monde Graphite, for example, had invited suppliers of battery-electric, plug-in and hydrogen fleets to tender for the contract at its Matawinie operation in Quebec, Canada. This will be an increasingly common approach as the industry and specific sites seek out the best fleet solution to meet their diverse needs.